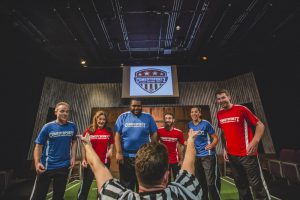 We are currently offering virtual shows and more! For more info, click here.

ComedySportz is not only our most popular show, it is also the longest running show in Los Angeles. It premiered here in 1988.  Over 25 years of making everybody laugh!  ComedySportz has been “oohed and aahed” over in the media, everywhere from Sports Illustrated to college newspapers, from The Today Show to national radio broadcasts. Los Angeles is one of more than twenty-five ComedySportz teams across the world that compete annually in regional and international improv comedy tournaments.

It’s not comedy about sports; it’s comedy PLAYED as a sport! Two teams of our professional improvisers compete for laughs and points in this hilarious comedy competition. It’s complete with a referee, uniforms, artificial turf, pennants, an organist and even the National Anthem!

There are fouls in ComedySportz to keep the show from being boring or in poor taste; there’s even one to make a player apologize for telling a lame joke! When was the last time you saw that? The show is always completely interactive, and suitable for all audiences.  If you think “clean” is boring, you owe it to yourself to check us out. It’s anything but boring. ComedySportz® even works for tough-to-please business groups.

Because everything is improvised, no two matches are alike. Fans never see the same thing twice, and they return again and again to cheer on their favorite players. The audience helps pick what games the teams will play, yells suggestions and ultimately decides which team is the evening’s winner.